Why the necessity for a new Constitution?

The new Constitution, containing 180 articles, compared to the 108 of the current Constitution, has been drafted in the light of the wave of demands for democratic improvements that we have witnessed in the past months in the whole Arab world. Seeing the faith of the dictators of Tunisia, Egypt and Libya on the one hand, and being confronted with a rising threat of massive demonstrations at home on the other, Muhammad VI promised in March to prepare a draft of a new Constitution which would drastically cut his powers.

Muhammad was swift in his action and saw that it would be better to pre-empt his people’s demands than to wait for them to grow angry and jeopardize the position of the King as the leader of Morocco.

Last week – just three months after the announcement of changes – Muhammad VI presented the result of the revision of the current Constitution. The new Constitution – “drawn up by Moroccans, for all Moroccans” – will furthermore be subjected to a referendum on July 1, leaving a very short period for a public debate beyond superficial analyses. It should also be noted that the text has not been prepared by a constituent assembly, which is usually the case in democratic transitions, but by a special commission appointed by the King, which was invited to take into account the demands of political parties, unions and other representatives of the civil society.

What does the new Constitution bring?

Protests against the proposed Constitution 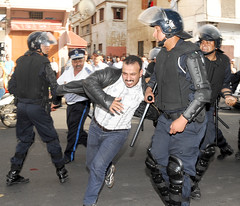 Muhammad VI will mantain control over the Maroccan police

It is evident that the new Constitution delegates to the prime minister and parliament more executive authority, but the King Muhammad VI will nevertheless retain key powers and also continue as the head of all security forces. All political parties, with the exception of some minor leftist formations and the Islamic Justice and Development Party, were quick to welcome the reforms, but the members of the February 20 movement, which since February this year has been calling for democratic reforms, called soon after for a protest against the insufficient constitutional reforms. The critics want the changes to be drawn up by a democratically elected committee instead of being proposed by the King and criticize the fact that referendum will be held already on July 1, leaving little time for real debate.

In short, despite democratic advances the Constitution lacks more democratic controls and it seems that the King is trying to push through the reforms by introducing a very swift timetable for the referendum. People have started gathering on the streets, but whether the whole Moroccan society sees the glass half empty or half full will be shown by the results of the referendum – providing of course the execution of the referendum itself will comply with basic standards; the previous constitution was approved by a suspiciously high 99% of voters in 1996. 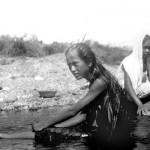 The Philippines: the Subic Bay or a case of oppression,... Previous
When art goes where nobody expected Next