In the sphere of international aid and development assistance, Turkey is a rising star. Tackling the Syrian refugee crisis with unsurpassed dedication, the Turkish Cooperation and Coordination Agency (TIKA) has simultaneously continued to deliver aid everywhere from Africa to Latin America.

In 2010, Turkey delivered $1 million in disaster relief to Haiti in the wake of the earthquake that devastated the country, and by 2011 it gained notoriety for being one of the largest donors to take on the task of battling the famine in Somalia.

Now Turkey is the world’s third largest national donor, falling behind only the United States and the United Kingdom. Over the past decade, Turkey’s spending on humanitarian aid soared from $73 million in 2002 to almost $3.3 billion in 2013. It’s an unprecedented growth spurt for a country that is still one of the largest recipients of aid from the European Union.

But while Turkish aid is growing each year, the lack of transparency that characterizes the way TIKA allocates its funds is indicative of an important trait of the Turkish political system.

Observers everywhere have a sneaking suspicion that Turkish politics, and likewise, Turkish aid, are a one-man show, with current President Recep Tayyip Erdoğan pulling all of the strings and playing all of the roles.

On August 10 2014, the former Prime Minister of Turkey became the country’s first popularly elected President with 52% of the vote. After relinquishing the premiership in the final months of summer, Erdoğan immediately began plotting to strengthen the heretofore-ceremonial role of the President.

“For the past 10 years he has had the last say in every issue,” Sukru Kucuksahin, a columnist for the Turkish Daily newspaper Hurriyet, told the Associated Press. “Whatever he says goes.”

Now, the newly appointed President plans to ensure that “every matter in the country, including infrastructure or other projects, would be the President’s job.”

As Prime Minister, Erdoğan wielded supreme power over TIKA. Now, the agency’s haphazard management style is cause for pause among observers, and it is unclear what changes will be made now that Erdoğan is out of the premiership and into the Presidency. 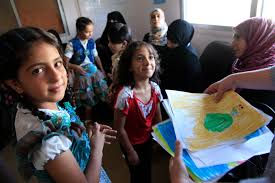 But when Turkey’s unexpected economic upsurge made it possible to allocate more resources to international assistance, Turkey made aid a permanent part of its foreign policy strategy, extending its influence across the Muslim world and beyond. TIKA now implements projects in over 100 countries.

How TIKA decides which projects are funded and where, however, is far from clear, and many suspect that important decisions are made based on Erdoğan’s whims.

Officially, the agency’s annual priorities are decided directly by the Prime Ministry, a fact that gave Erdoğan disproportionate decision-making power while Prime Minister. Although an Advisory Council meets once a year to discuss TIKA’s strategic priorities, its influence is questionable. No decisions are made at the council’s annual meeting, and Erdogan has been known to spontaneously approve new development projects during his trips abroad. In fact, some critics have accused TIKA of functioning as a travel agency for Turkey’s most influential politician.

Meanwhile, the Advisory Council –a group of high-ranking representatives of ministries and government institutions handpicked by the Prime Minister– serves as a platform through which activities are coordinated between the various ministries. Consequently, the Advisory Council’s annual meeting is little more than an opportunity for the Prime Ministry to dole out tasks to corresponding officials.

Unsurprisingly, TIKA’s current President, Dr Serdar Çam, is a staunch ally of Erdoğan. He served as his Chief of Cabinet from 2002 to 2009 and often accompanies him on trips abroad. In fact, at the time of writing this article, Dr Çam was unavailable for an interview because he was travelling with the current President.

Theoretically, the Turkish Ministry of Development should have a say in planning how Turkey’s official direct assistance is granted. But in reality, the Ministry remains almost completely uninvolved in these matters.

Horizontal decision-making is hardly a characteristic of the Turkish political system. As activists from the Gezi protests of 2013 have pointed out, Turkey’s political and legal structures have no mechanisms to ensure citizen participation in policy or decision-making.

And while a lack of transparency makes it difficult to assess just how hierarchical TIKA’s decision-making processes really are, many experts believe that Erdoğan’s personal connections to TİKA ensure that the agency is dependent upon his instructions and unable to pursue independent policy.

While these may be mere allegations, they are far from disproved by the fact that TIKA has no institutionalised decision-making processes to speak of.

An Unorthodox Style of Management:

Notably, TIKA’s management style is extremely different from that of other major donors. Constrained by a Turkish law requiring any cash transferred to other organizations – including the United Nations and non-governmental organizations – be approved by parliament in a two-to-four year process, the agency tends to implement projects on its own. Multilateral aid is thus fiercely constrained. 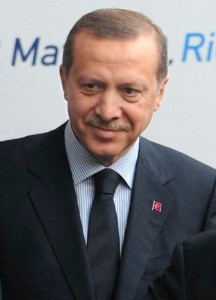 According to Durmus Aydin, a spokesman for one of the only Turkish humanitarian aid organizations that receives regular funding from TIKA, the Humanitarian Relief Foundation (IHH), organizations that do collaborate with TIKA are not awarded grants for project implementation, as they would be when working with other international donors. Instead, TIKA often purchases the materials necessary for implementation and gives them directly to the organization in question. TIKA officials are also deeply involved in observing the projects and are frequently brought in as auditors and advisors.

Although Turkey has a lot to be proud of regarding the quality and extent of its international assistance, many have highlighted that this style of management may not be the most efficient, or the most professional.

“Turkey tends to be a fairly unilateral player,” EJ Hogendoorn, Africa deputy programme director at the International Crisis Group (ICG), was quoted saying. “It is directly providing assistance to the ground – that, by implication, means that less money is spent by large and cumbersome bureaucracies. But I do think that also raises concerns that aid assistance is not being coordinated with other agencies and thus is not as efficient as it could be.”

“Turkey needs to improve its policies by embarking upon a better model of governance”, said Taner Kılıç, head of the Association for Solidarity with Refugees (Mülteci-Der), in an interview with the Hurriyet Daily News.

And United Nations Development Programme (UNDP) staff who advised TIKA on how to improve their aid effectiveness also criticized TIKA’s lack of consistent procedures in an internal document:

“Lack of country strategy and written criteria for selection make it difficult to identify the project ideas in a coherent manner. Lack of baselines, targets and indicators makes it difficult to measure the success of projects, and consequently, to comply with aid effectiveness principles.

TIKA needs to develop a clear and transparent policy, criteria and procedures for an effective management of projects.”

Still others have criticized how project personnel are selected. According to a report by the German Development Institute, experts believe that TİKA assigns personnel based on a reward principle as opposed to expertise, greatly affecting the efficiency of its operations.

But TIKA representatives note that this ad hoc style of decision-making may make TIKA more flexible in emergency situations, and thus a more desirable donor.

“It is true that most of the Turkish official direct assistance is bilateral. The main reason is that there is incompatibility between the modes of conduct. We are very practical. We easily decide and implement projects. Our friends – traditional donors – their budgeting system is different. They submit projects to their parliament and get a budget. We get an aggregate budget. First we have the money, then decide the projects. We can easily decide on a project. They are not so flexible in that sense. In terms of aid effectiveness, we have some value added in that sense,” said Mehmet Yilmaz, head of external affairs and partnerships at TIKA, in an interview with relief web. 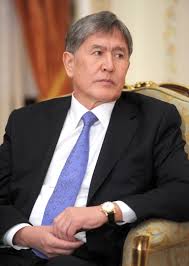 Kyrgyz President Atambayev congratulated Erdoğan on his victory in the Presidential elections, Wikipedia.

Because TIKA falls under the Prime Minister’s office, it has abundant resources and unrivalled access to experts in each of the ministries. Moreover, it can easily mobilize public expertise and use public institutions to speed up responses in emergency situations.

According to Harun Avci, the Deputy Head of TIKA’s coordination office in Kyrgyzstan, there are no strategic annual priorities because TIKA officials want to have complete flexibility.

“If a Kyrgyz official comes to us and says there is a need for a project, we can decide whether or not to implement it. We are not constrained by preconceived commitments and thematic priorities”.

But Avci also admitted that personal relations between Erdoğan and high-level officials can determine which projects are chosen to be supported.

Regarding the renovation of a national museum in the Kyrgyz capital Bishkek, Avci claimed that Kyrgyz President Almazbek Atambayev directly appealed to Erdoğan to have the project financed. “They are very close,” he said matter-of-factly.

While some criticize the way Turkey doles out its resources, others are questioning what it is that Turkey is actually funding. 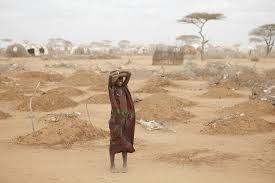 Turkey provided aid during the famine in East Africa, Wikipedia

According to a report by the International Crisis Group, youth from the al-Qaeda-affiliated militant group Al-Shabab applied for Turkish scholarships in Somalia. This could suggest that Turkish aid is providing an alternative to extremism, but it could also mean that extremists are reaping the benefits of Turkey’s presence the same way civilians are.

Meanwhile, Turkey supplied direct budget support to the Somali government but refused to provide any details to the public regarding the government’s methods for delivering this aid.

As Turkey battles the infamous Islamic State in Iraq and the Levant (ISIL) on its borders, TIKA-funded institutions in the Balkans are being closed down for aiding and abetting terrorists.

In September 2014, the Turkish daily Taraf reported that several TIKA-backed associations in Kosovo had been shut down for allegedly offering support to ISIL and the al-Nusra front. Kosovo police recently raided and closed 16 associations suspected of encouraging young men to go to Syria and Iraq as jihadists. Around thirty Imams, including one who worked in a mosque reconstructed by TIKA, were also arrested.

“This news is a pack of lies and complete slander,” Deputy Prime Minister Numan Kurtulmuş stated. 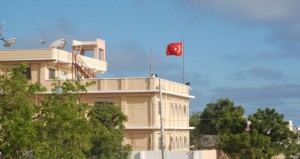 Turkish Embassy in Mogadishu, Wikipedia. Turkey is one of the only countries with an embassy outside of Somalia’s fortified airport.

TIKA authorities also stressed that the agency is not responsible for who is hired in Kosovo, even if these individuals work in mosques that TIKA helped to finance.

Aside from stressing its flexibility, however, the agency is far from forthcoming regarding its modus operandi. Understanding the inner workings of the agency is certainly no easy task, but all signs seem to indicate that the most expedient route to collaboration involves getting into Erdoğan’s good graces.

While no one will deny that Turkey has been instrumental in battling some of the worst humanitarian disasters developing on its borders and throughout the Muslim world, serious questions remain about whether Turkish aid could be even more effective if transparent processes were put in place.

What changes Erdoğan’s stint as President will produce remains to be seen. But it is clear that the international community is waiting attentively to see whether these changes will be for the better or for the worse. 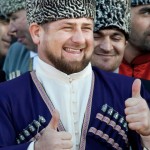 Propaganda personalized: A tyrant's use of social media Previous
To be or not to be Charlie, that is the question Next 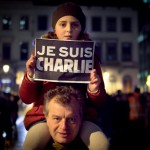