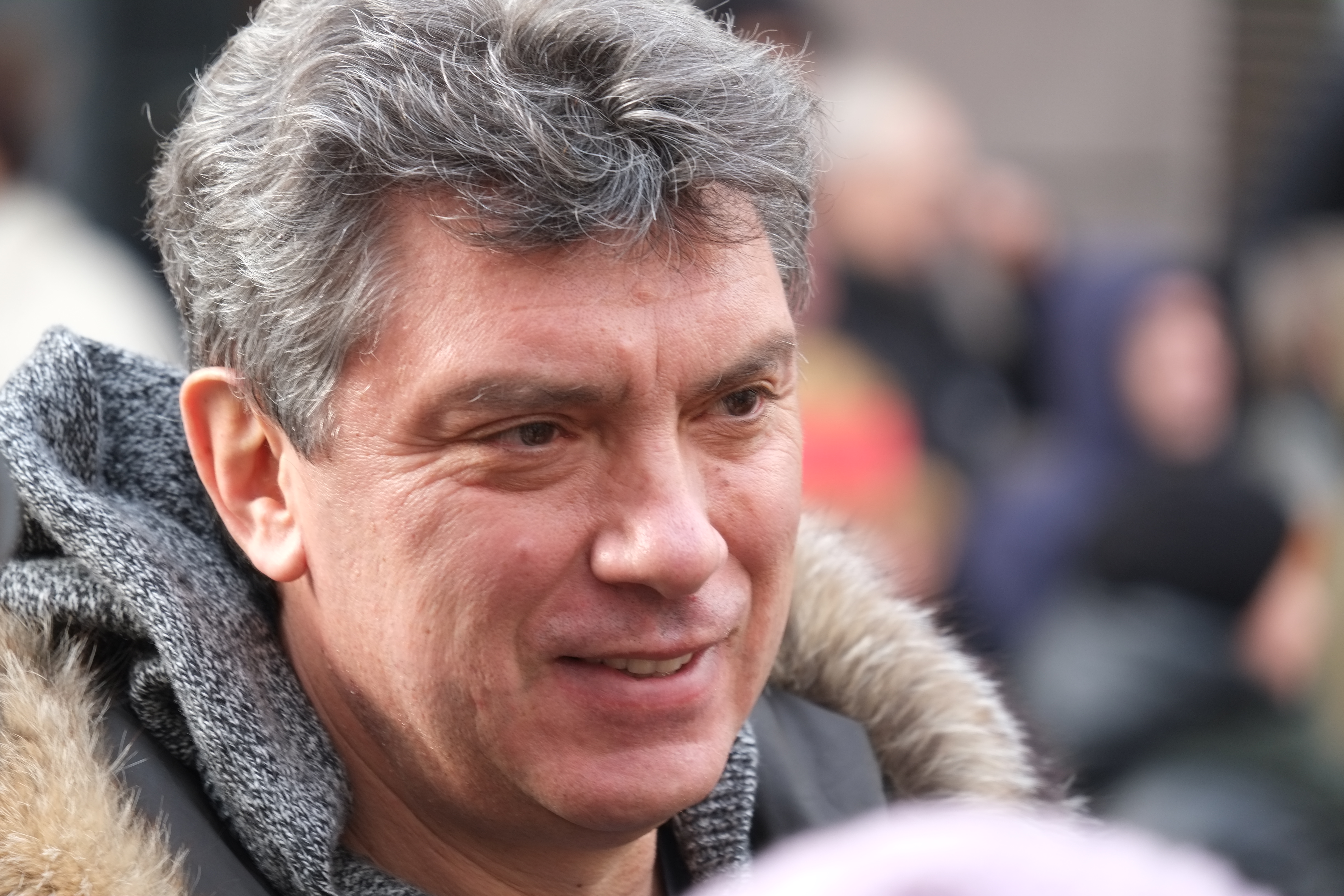 Russia’s former Deputy Prime Minister turned opposition politician Boris Nemtsov, was gunned down in Moscow with four shots to the back on Friday February 27. He was in sight of the Kremlin and the famous Saint Basil’s Cathedral on Red Square, an area that is heavily monitored by security cameras.

Since his death, numerous theories have been thrown around about who the perpetrators and masterminds are, what their motives may have been, and what impact Nemtsov’s death will have on Russia’s fragile political opposition. Some fear that the result will be a renewed crackdown on opposition activists.

Whatever the motive for his murder, Boris Nemtsov’s true killers will probably never be found, and Russia lost a man who supporters say worked tirelessly to bring Russians together, regardless of ethnic background or creed, in an attempt to end the Putin regime.

At a meeting with top officials from the Interior Ministry on Wednesday March 4, President Putin demanded an investigation into the crime.

“The most serious attention must be paid to high-profile crimes, including those with a political motive,” Putin said. “We must finally rid Russia of the disgrace and tragedy of the kinds of things we recently saw and experienced: I mean the audacious murder of Boris Nemtsov in the very center of the capital.”

But Putin’s regime has a habit of choosing scapegoats who are either innocent of the charges laid against them or entirely ignorant of the origin of their order.

The murder of journalist Anna Politkovskaya in 2006 is a prime example of how the regime treats such acts. Chechen assassins were brought to trial, but nothing was ever really proven. In the end, the blame was placed on the exiled oligarch Boris Berezovsky, who denied the allegations from the safety of his mansion in London. 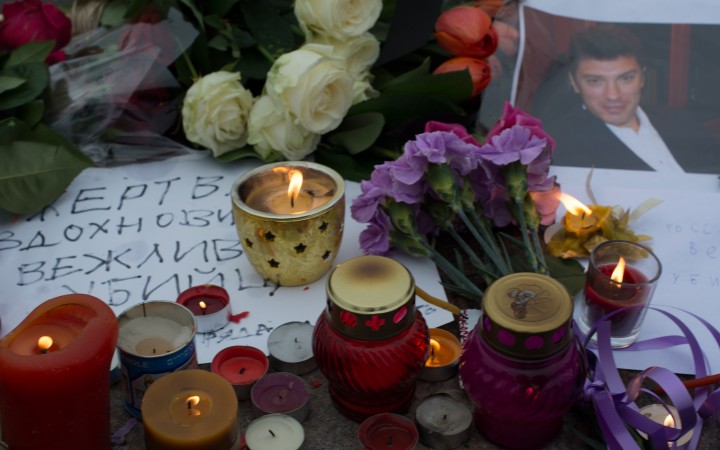 Flowers and candles left at the site of Nemtsov’s murder, Wikipedia.

Meanwhile, the Kremlin’s investigation into Nemtsov’s murder has been laughable. At the very beginning of the investigation, Vladimir Markin, spokesman for the Russian investigative committee, alleged that Nemtsov’s own supporters had killed him so he could be used as a “sacrificial victim”.

“Who knew Russia had such crack detectives — not just fast in their investigation of the murder of Boris Nemtsov but practically clairvoyant. Within a day of the dissident’s killing on Feb. 27, they offered a bundle of possible motives, predictably ranging from a business dispute to a love affair gone wrong, but with two big surprises,” wrote journalist Simon Shuster, tongue in cheek, for Time Magazine.

“For one, they ignored the possibility that Nemtsov’s conflict with the Kremlin had anything to do with the murder. And then there was the theory bizarre enough to make the victim’s friends do a double take: the sleuths suggested that some religious fanatic could have killed him for insulting Islam.”

Similar to the investigation into the murder of Anna Politkovskaya, a Chechen was singled out as the perpetrator. Zaur Dadaev, a decorated officer in the Russian security services and a Muslim, was quickly apprehended and put behind bars. Russian news agencies, citing the judge presiding over the case, reported the Dadaev had confessed to the crime. But some observers noted that it was suspicious that Dadaev had refused to confess during a public hearing. Dadaev later claimed that he had been pressured into admitting guilt while in custody. Some claimed that he had been tortured. In April, Dadaev’s pre-trial detention was extended until August 28.

“The official version of the inquiry is more than absurd. In my opinion it is the result of a political order from the Kremlin,” Ilya Yashin, who co-founded the opposition movement Solidarnost with Nemtsov, told Agence France Presse.

In response, opposition economist Slava Rabinovich used his Facebook page to call for an international commission to investigate the murder. Rabinovich also encouraged Nemtsov’s family to appeal to the European Court of Human Rights.

“Boris Nemtsov’s rights have been violated — most importantly, the right to life. Including the ECHR, in parallel with the Commission, will give even more weight,” Mr. Rabinovich wrote.

This piece of advice became more relevant in the following days when it was revealed that the Nemtsov family has not been granted any legal representation in court proceedings because they have not been acknowledged as victims. This means that they have no access to investigators’ evidence and materials, and no procedural rights.

Many in the opposition said they were discouraged by Nemtsov’s murder and feared for their own lives. There were discussions about whether it was better to just leave the country and go into exile, especially after other activists received death threats both online and at Nemtsov’s memorial service.

But not everyone adopted a defeatist attitude. Others were inspired to fight. Opposition figure Ilya Yashin vowed to continue Nemtsov’s work on a report detailing the use of Russian soldiers in the Ukraine conflict.

“He [Nemtsov] said in the very near future he was going to assemble and put in order various evidence and documents directly proving the presence of the Russian military on the territory of Ukraine and, accordingly, (exposing) President’s Putin’s lies that there are no Russian servicemen there.”

However Yashin had his work cut out for him, as much of Nemtsov’s research was not written down due to his expressed fear that the authorities would confiscate his notes. On May 12, opposition leaders released the finding of Nemtsov’s report. The report alleges that Russia’s annexation of Crimea was planned in advance and that Moscow has been hiring mercenaries to interfere in eastern Ukraine.

There is no doubt that Boris Nemtsov was an enemy of the Kremlin. While he had a successful political career under the leadership of Boris Yeltsin, and even held the role of Deputy Prime Minister for 4 months in 1998, by the early 2000s he had become an outspoken critic of Vladimir Putin, who he viewed as authoritarian and undemocratic. Some tried to dismiss the importance of his work exposing the Putin regime’s crimes and misdemeanours, claiming that his audience was small and insignificant. But none would deny that Nemtsov worked tirelessly to expose the corruption of the regime, through written reports and face-to-face meetings with Russian citizens. 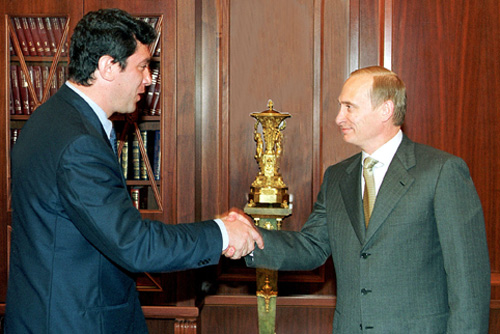 Meanwhile, opposition politician Vladimir Milov speculated that Nemtsov was murdered because his support for Western sanctions against Russia caused the Kremlin to view him as a traitor to the country.

In statements made to the Financial Times that were published the day of his death, Nemtsov drew attention to the fact that he has been trying to correct Russians’ misperceptions about Western sanctions and Putin’s food-import embargos.

“They believed that the embargo on imported foods is America’s fault, and they were surprised when I told them no, that was not Obama, it was Putin,” Nemtsov said. “This is what we need to make people aware of: the crisis, that’s Putin.”

Moreover, Nemtsov was a vocal opponent of Russia’s involvement in Ukraine. In July 2014, Nemtsov had filed a complaint to the main federal investigative authority in Russia, the Investigative Committee, saying that he had received death threats related “to my political position on the events in Ukraine”. The full complaint was published by the Russian publication New Times here.

“Anyone who watches Russian state television – and that includes the vast majority of Russians – will have seen a picture painted over the past year of a victimised Russia attacked by voracious western vultures who want, at least, to make Russia irrelevant on the world stage, and at worst to mount a coup and install a puppet government,” wrote the Guardian’s Shaun Walker the day after Nemtsov’s murder.

“According to this narrative, the Russian opposition are traitors, working to destroy the country.”

Now, nearly three months after his death, Nemtsov’s family and supporters are no closer to learning the truth about who ordered the opposition leader’s death.

“None of us, Nemtsov’s friends, doubt that the investigation has informed the president where the order for Nemtsov’s murder came from.” The decision about what to do with this information is “being made at the top,” State Duma Deputy Dmitry Gudkov told the Daily Beast. 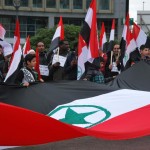 Ahwazi Arabs, the silenced and discriminated community Previous
Greece, what now? Next 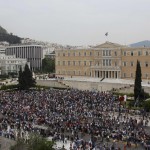