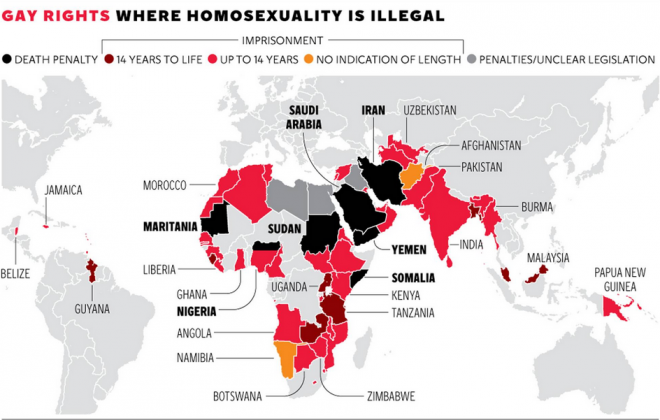 Did you know that there are countries where being gay is punishable with the death penalty?  Yes, although homosexuality has been legal in countries like France, Monaco and Luxembourg, since 1791, 1793 and 1795 respectively, there are still a number of countries where, well into the 21st century, it is still a crime to be homosexual.  Just 22 years ago, in May 1992, the World Health Organization officially determined that homosexuality was not to be considered a mental illness.  More recently, on December 18th, 2008, under a French/Dutch initiative backed by the European Union, the UN’s declaration on sexual orientation and gender identity was approved.  The first time the UN took a stance on LGBT rights was in 1994, with the Human Rights Committee supporting the favorable verdict in the Toonen vs. Australia case.

Today, according to the ILGA (International Lesbian and Gay Associations), there are still 76 countries that consider it illegal to practice homosexuality – with 10 punishing it by death (Sudan, Mauritania, Nigeria, Qatar, Somalia, Saudi Arabia, United Arab Emirates, Yemen, Iran and Iraq).  In contrast, a total of 54 countries have laws that prohibit discrimination based on sexual orientation in the workplace.  Additionally, 16 countries have legislation underway on gay marriage, two of which (Mexico and the United States) leave its approval to regional governments. Australia and Colombia are also taking steps towards national legalization.  Strangely, in some countries (like Malawi, Singapore, Turkmenistan, Guyana, Jamaica, Lesotho, Belize and Swaziland, among others), homosexuality is prohibited for men but legally acceptable for women.

Last February, at the Winter Olympic Games in Sochi, Russia was harshly criticized by pro-gay and human rights groups for criminalizing homosexuality.  The recent rise in violence by Russian neo-Nazi groups chasing, attacking and torturing people for being – or just appearing to be – homosexual caused alarm around the world.  One of the strongest critics of the Russian government was the Canadian Institute of Diversity and Inclusion, which launched a video that rapidly went viral.

In the map above, it becomes apparent that the majority of countries which do not recognize homosexuality are found in Africa and the Middle East.  Today, over 30 African countries perceive homosexuality as a crime, some 66.7% of the countries in the continent.  Oceania comes in second at 60%, followed by Asia (40.4%) and America (30.4%).

One of the countries that treats homosexuality most harshly is Saudi Arabia, which, like the majority of Muslim countries, is ruled by Islamic or Sharia law, which prohibits romantic relationships between people of the same sex and punishes them regardless of the form they take.  Lacking a formal penal code, the punishments for sodomy range from fines, beatings, and amputations to psychiatric treatment and in some cases, death.  There are also no laws against discrimination, making it legal to deny homosexuals apartments and jobs, based solely on their sexual orientation.

Another dark spot on the map for homosexuality is Uganda.  Sexual activity between people of the same sex – men as well as women – is illegal in the country.  The LGBT population in Uganda is estimated to be around 500,000 (out of a total 36 million).  In a 2007 survey by the Pew Global Attitudes Project, 96% of Ugandans indicated that homosexuality ought to be banned from society, one of the highest rates in the 45 countries surveyed.  However, a 2010 survey, triggered by an anti-homosexual draft bill, revealed that 11% of Ugandans saw homosexuality as morally acceptable.

This past February, Ugandan President Yoweri Museveni enacted a law that would make homosexuality punishable with life in prison (but not the death penalty).  One of the most criticized aspects of the law is that it criminalizes even talking about homosexuality, as this is interpreted as promoting it.  This means any organization defending homosexuality is also considered illegal and could be shut down; its members, for their part, could be arrested and sentenced to anywhere from 14 years to life in prison.

Translation of the original article in Spanish by Tristan Franz 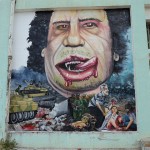 Libya: Set to crumble? Previous
What is Socially Responsible Investment (SRI)? Next 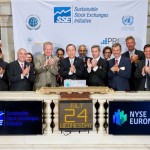