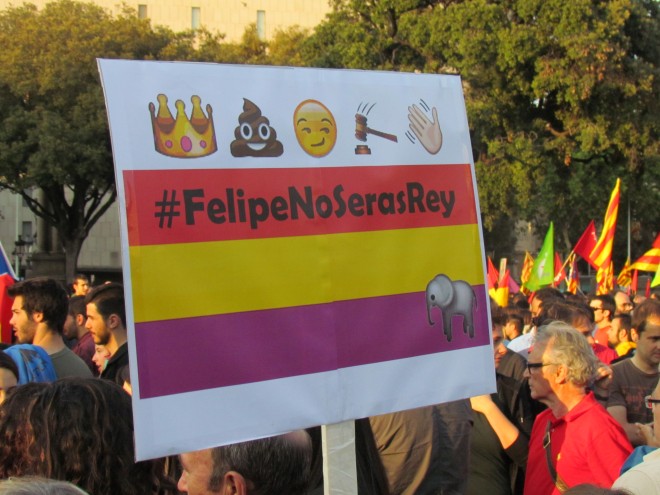 On the morning of June 19th, 2014, a new king came to power in Spain: Philip VI, formerly known as the Prince of Asturias. Two weeks earlier, on June 2nd, Spain’s Prime Minister Mariano Rajoy had announced that King Juan Carlos I had decided to abdicate and transfer the throne to his son. At about 1PM that day, Madrid time, a speech recorded by the King was broadcast publicly. The speech was fairly short, and lasted just some six minutes. The King explained the reasons for his “resignation”, pointing out the need for a generational renewal to modernise Spanish politics. 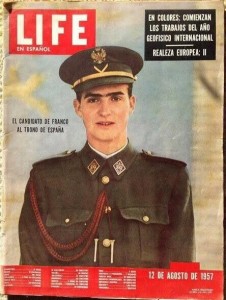 The Spanish Crown has traditionally been the best regarded political institution in Spain since the Transition (a term for the country’s transition into democracy, undertaken after the death of the dictator Franco). Nevertheless, it has received failing grades since 2011: the latest survey carried out by the government-owned Centre for Sociological Research in April 2014 gave the royal family a grade of 3.72 out of 10.

Spain is currently undergoing a political crisis of enormous dimensions. At the level of the political parties, the traditional centre-left/right bipartisanship of Socialists and the Popular Party would appear to be in danger after the recent European elections, where alternative political movements such as Podemos and Equo emerged and gained huge popular support. At the political level, issues like the Catalan self-determination movement and the demand for constitutional reform are straining relations between Spain and its regions. In the economic department, the country has been suffering under the weight of an massive crisis for a few years now. This has created nearly unbearable levels of pressure on the future of the country’s financial and labor markets. Political culture is similarly affected: several cases of corruption and embezzlement have recently been unveiled, both in major parties and in many political institutions like chambers of commerce or provincial councils. As a matter of course, corruption has also affected the royal family, especially the King’s son-in-law and his wife, the Infanta Cristina.

This has led Spain to a social crisis of astronomical dimensions, in which many traditional political and social values have come under scrutiny. 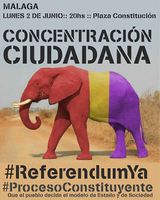 Poster calling for a public gathering to claim a referendum, Malaga

King Juan Carlos’s abdication will doubtlessly be one of the events of the decade in Spanish politics. As he himself stated in his official communiqué, it is a matter of stepping down and giving way to “the younger generations claiming their role” in political life. A few political analysts have declared that the Transition has officially finished, after the King’s abdication. This may or may not be true; however it is undeniable that the abdication marks the end of a political era.

In spite of all this, other factors may have influenced the King’s decision to abdicate. The choice was actually made in early January 2014. By late March, both the Prime Minister and the leader of the opposition had been informed. Speculations indicate the King’s health as a key factor for his abdication. With his 76 years of age and recurring health issues, it is plausible that he does not feel capable of fulfilling his duties to his utmost. This may also explain why he has relegated part of his agenda to the Prince of Asturias.

Another reason may be Spaniards’ lack of faith in the country’s political class after the numerous corruption scandals and the lack of political responsiveness to high-priority issues like the economic depression and the fit of Catalonia in Spain.

There are a number of different paths Spain can take at the moment. Both the Prime Minister and the leader of the opposition have echoed in their speeches the normality and stability of the succession process, taking for granted the fact that the King’s abdication is in no way related to the country’s political situation, and assuming Spain will be back to business as usual in a few weeks’ time. They approved an Act of Parliament to set Juan Carlos’s succession to the throne in motion, as provided for in Article 57.5 of the Spanish Constitution.

The King’s abdication has revived the public debate on Spain’s state model. That is, there are many Spaniards today wondering whether it would be better for Spain to become a republic. To said effect, several political groupings, like Podemos, United Left and the Socialists’ youth wing, have called for a referendum in which all Spaniards would be allowed to freely and democratically express whether they want Spain to carry on being a constitutional monarchy or not. Meanwhile, thousands of citizens have demonstrated peacefully in big cities demanding a constitutive process, i.e. a referendum. 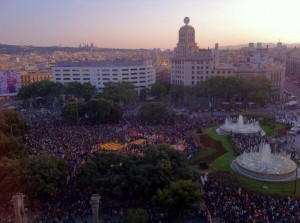 A referendum would boost input legitimacy, as it would allow the Spanish people to exercise their sovereign rights. Unlike the United Kingdom, Spain’s constitution is based on popular sovereignty. On the other hand, a rapid succession process would improve the country’s stability in times of deep trouble (i.e. output legitimacy). Those defending the republican model argue that an elected head of state is a mandatory requirement in any 21st-century full democracy. Those defending the monarchical model, however, argue that Spain has few people as well-prepared as Prince (now King) Philip to become head of state. They also argue that the fact the head of state is an institutional figurehead and not a political one boosts the country’s image, providing Spain with the best possible ambassadors abroad.

Whatever happens, Juan Carlos’s abdication marks the end of an era which, with its ups and downs, has been characterised by the country’s entry to democracy and the modernisation of its political culture. For now, and with Philip VI sworn in, it does not look as if there will be a referendum. The question remains whether any moves will be made on this front under a new King of Spain.

[Cover photo: Poster against the succession of Philip of Bourbon, during the republican referendum in Barcelona on the 2nd of June / Iris Aviñoa] 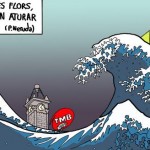 People power - The inspiring example of Can Vies Previous
After the hysteria: What next after the European elections? Next 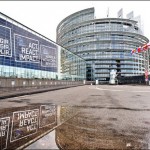